Date nights, why we should all make the effort

This was the opening paragraph about the date nights the arguably busiest (and most powerful) couple in the world.

THEIRS is a seasoned marriage, 16 years and counting. They are middle-aged. Life is that modern-crazy haze: two girls in the windstorm of year-end school activities, the puppy that must be walked twice daily, the live-in mother-in-law. They both work long hours. Standard recipe for a drive-by relationship. 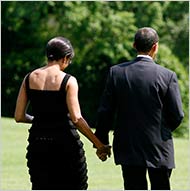 But the first couple seems to have regular date nights, and by all accounts – a hot marriage.
Aude Guerrucci/Bloomberg News

AWWW The first couple, leaving the White House for an evening out in New York.

Elbowed sharply in the side, husbands felt betrayed by the commander in chief. On “The Daily Show,” Jon Stewart reviewed the Obamas’ glamorous foray and screeched, “How do you compete with that?” He warned Mr. Obama, “Take it down a notch, dude!”

I've long been lamenting about the need for a weekly date night for my patients. It keeps things hot, increases the connection, and generally makes sex fun and inclusive again. I give my marriage counselling patients a structured list of what I call "marriage saving activites" that include things like white water canoeing, adventure camping, parking and outdoor sex.

Here are my rules for date nights…

1. Weekly or bi weekly, and they need to be scheduled. Each partner is then in charge of organizing activities for thier respective nights.

2. The other partner gets to "shut up and co-operate". You can plan something different on your night, but no complaints are allowed.

3. A minimum of 30 minutes of non-genital touch needs to happen.

4. You can't do the same thing over and over.

5. You try and do something that promotes intimacy.  Loud hockey games (except if there is loads of smooching), don't qualify.

6. You talk about experiences, fantasies, or things you want to do. Not the kids

Here's the article from the New York Times about the science of keeping it exciting.

But brain and behavior researchers say many couples are going about date night all wrong. Simply spending quality time together is probably not enough to prevent a relationship from getting stale.

Using laboratory studies, real-world experiments and even brain-scan data, scientists can now offer long-married couples a simple prescription for rekindling the romantic love that brought them together in the first place. The solution? Reinventing date night.

Rather than visiting the same familiar haunts and dining with the same old friends, couples need to tailor their date nights around new and different activities that they both enjoy, says Arthur Aron, a professor of social psychologyat the State University of New York at Stony Brook. The goal is to find ways to keep injecting novelty into the relationship. The activity can be as simple as trying a new restaurant or something a little more unusual or thrilling — like taking an art class or going to an amusement park.

The theory is based on brain science. New experiences activate the brain’s reward system, flooding it with dopamineand norepinephrine. These are the same brain circuits that are ignited in early romantic love, a time of exhilaration and obsessive thoughts about a new partner. (They are also the brain chemicals involved in drug addictionand obsessive-compulsive disorder.)

Most studies of love and marriage show that the decline of romantic love over time is inevitable. The butterflies of early romance quickly flutter away and are replaced by familiar, predictable feelings of long-term attachment.

But several experiments show that novelty — simply doing new things together as a couple — may help bring the butterflies back, recreating the chemical surges of early courtship.

“We don’t really know what’s going on in the brain, but as you trigger and amp up this reward system in the brain that is associated with romantic love, it’s reasonable to suggest that it’s enabling you to feel more romantic love,” said the anthropologist Helen E. Fisher, of Rutgers, who has published several studies on the neural basis of romantic love. “You’re altering your brain chemistry.”

Over the past several years, Dr. Aron and his colleagues have tested the novelty theory in a series of experiments with long-married couples.

One group was instructed to spend 90 minutes a week doing pleasant and familiar activities, like dining out or going to a movie. Couples in another group were instructed to spend 90 minutes a week on “exciting” activities that appealed to both husband and wife. Those couples did things they didn’t typically do — attending concerts or plays, skiing, hiking and dancing. The third group was not assigned any particular activity.

After 10 weeks, the couples again took tests to gauge the quality of their relationships. Those who had undertaken the “exciting” date nights showed a significantly greater increase in marital satisfaction than the “pleasant” date night group.

While the results were compelling, they weren’t conclusive. The experiment didn’t occur in a controlled setting, and numerous variables could have affected the final results.

More recently, Dr. Aron and colleagues have created laboratory experiments to test the effects of novelty on marriage. In one set of experiments, some couples are assigned a mundane task that involves simply walking back and forth across a room. Other couples, however, take part in a more challenging exercise — their wrists and ankles are bound together as they crawl back and forth pushing a ball.

Before and after the exercise, the couples were asked things like, “How bored are you with your current relationship?” The couples who took part in the more challenging and novel activity showed bigger increases in love and satisfaction scores, while couples performing the mundane task showed no meaningful changes.

Dr. Aron cautions that novelty alone is probably not enough to save a marriage in crisis. But for couples who have a reasonably good but slightly dull relationship, novelty may help reignite old sparks.

And recent brain-scan studies show that romantic love really can last years into a marriage. Last week, at the Society for Personality and Social Psychology conference in Albuquerque, researchers presented brain-scan data on several men and women who had been married for 10 or more years. Interviews and questionnaires suggested they were still intensely in love with their partners. Brain scans confirmed it, showing increased brain activity associated with romantic love when the subjects saw pictures of their spouses.

It’s not clear why some couples are able to maintain romantic intensity even after years together. But the scientists believe regular injections of novelty and excitement most likely play a role.

“You don’t have to swing from the chandeliers,” Dr. Fisher said. “Just go to a new part of a town, take a drive in the country or better yet, don’t make plans, and see what happens to you.”

September 8, 2009By SueLeave a comment
Sex and Food. How food "is as hot as a stiff cock" (a quote attributed to Julia Child in Julie & Julia)Androgyny – Is this a man or woman?